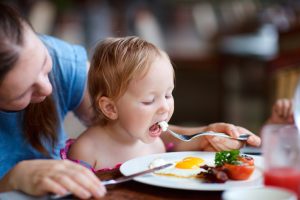 Various lifestyle factors—such as skipping breakfast—can affect body mass index (BMI) in early adolescence, a study published in the journal Pediatrics found. Investigators also found a correlation between an increase in BMI and a decrease in psychosocial well-being.

Researchers used data from the Millennium Cohort Study, which gathered data on children born in the United Kingdom between September 2000 and January 2002. Data was collected on 16,936 children at ages 3, 5, 7, and 11 years old.

Using a regression analysis, researchers were able to find correlations between early psychosocial factors and BMI at age 11. Skipping breakfast, smoking during pregnancy, a high maternal BMI, and irregular bedtimes correlated with membership in the “moderate” and “high” increasing BMI groups.

Children whose BMI increased over time scored worse on measures of mental health. They were more likely to have difficulties getting along with peers. They also reported lower body satisfaction, self-esteem, and happiness. Children in the “high increasing” BMI group were more likely to use cigarettes and alcohol.

Previous research shows children who experience pediatric obesity are more likely to experience depression, body image issues, and other eating and food issues. They may also be more likely to be involved in bullying, exhibit aggressive behavior, and have symptoms of oppositional defiance.

Importance of Health Lifestyle in Childhood

The study’s authors say their research points to modifiable health risk factors that can affect BMI and mental health in early adolescence. While parents concerned about children’s weight may focus on diet or physical activity, this research points to the role of a healthy lifestyle—not just caloric intake—in adolescent weight.

Other research points toward a similar conclusion. Another recent study found a correlation between earlier bedtimes in preschool and a reduced risk of later obesity. A 2006 study of adult women found that sleeping less than five hours per night correlated with an increased obesity risk of 15%.