Exposure to Artwork Shown to Have Positive Effects on Youth 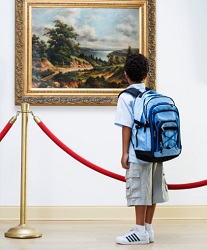 If you’ve ever wandered the halls and rooms of an art gallery or museum, you may have noticed a range of thoughts and emotions stirring within. Maybe you felt moved to sadness, happiness, or wonderment while viewing a particular piece. You may have left the exhibit feeling inspired or intrigued to learn more about an artist or era.

Whatever the individual responses experienced, it is widely accepted that artwork has the potential to influence our emotional state as well as our views and perceptions of the world around us. For those fortunate enough to have visited galleries and museums at a young age, whether on school field trips or in the company of a parent or guardian, the early exposure to paintings, sculptures, and other forms of artwork may have been more influential than realized.

From March 2012 through December 2012, researchers examined the effects of art exposure in a large-scale study of nearly 11,000 students who visited the Crystal Bridges Museum in Bentonville, Arkansas, during that time. When the museum’s school tour program was announced, demand for participation was so high that the 123 schools that participated in the field trips and study were selected at random to allow for students from a range of social and economic backgrounds to be included.

According to Anne Kraybill, school and community programs coordinator at Crystal Bridges and the person responsible for spearheading the study, students were led through a tour of four to five pieces of art, which were accompanied by “guiding questions” and “age-appropriate activities.” Six different tours were led for specific grade ranges, and each tour had four stops during a 60-minute period.

A few weeks after their one-hour museum tour, students in the “treatment group” were asked to write an essay based on one of the paintings they viewed at the museum that they had never seen before. The essays were then blindly evaluated and scored using a seven-item rubric for assessing critical thinking developed by researchers at the Isabella Stewart Gardner Museum in Boston.

The researchers’ findings revealed that after touring the museum, the students retained much of the information they learned, even weeks later—not because it was forced or for a test, but because they found the material interesting (Kraybill, 2013). Their essays also reflected increased historical empathy, tolerance, and critical thinking skills. These effects were especially pronounced in students who were “disadvantaged” with regard to economic means—primarily because outside of this school trip, the opportunities for these “rural and high-poverty” students to view art were limited or nonexistent (Greene, Kisida, and Bowen, 2014; Kraybill, 2013).

“The School Visit program uses a methodology that is student-driven,” Kraybill said in an interview with GoodTherapy.org. “Students exchange their ideas and opinions, and this requires a level of trust. Differing opinions are encouraged, but only if presented respectfully and with sensitivity. In addition, students are exposed to a wide range of perspectives presented by artists throughout time. This enables them to better empathize with people and times that are unlike their own. Looking at and interpreting art requires critical thinking. Students have to first observe, then make hypotheses and justify those with observational data. Then they have to infer about what might be happening in the artwork.”

The purpose of the study was largely to establish evidence that field trips and extracurricular excursions to art museums are a valuable experience for youth. Over the course of her years working in the museum world, Kraybill witnessed a decline in school tours (2013). To combat this trend and encourage ongoing student interaction with artwork, Crystal Bridges hosts daily school tours throughout the year with the help of funding from the Willard and Pat Walker Charitable Foundation.

“It has been an awesome and humbling experience to have over 30,000 students visit the museum through this program,” Kraybill said. “Every tour that is given is different because the students bring their own perspective to interpreting a work of art. We learn as much from them [as they learn from us] because each observation and interpretation is unique.”