Emotional Sherpa, Part III: Toward a Relationship of Trust 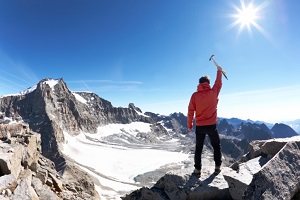 My client, Alex, had told me early on in therapy that he had a secret. As we progressed and climbed higher and higher in his therapeutic journey, we realized that certain revelations needed adjustment time. Once we could sit with a new level of disclosure, though, we were able to continue on as Emotional Sherpa and mountaineer.

One session, Alex was enjoying telling me about favorite things from his hometown. From certain hole-in-the-wall eateries, to museums, to the ballpark that he used to go to with his father as a young boy, my client gushed about his city with pride. In many ways he had taken me back to where I had found him and began to see things differently. It seemed that he had adjusted to the rarefied air and was now beginning to make better sense of things, of his life, and of where he came from. And during that session, he reminded me that he had “secrets.” I told him that I had not forgotten. He was telling me in that moment that he was getting ready to climb higher, but he was also wondering if I was ready for the climb ahead. I wondered with Alex if he thought that he could trust me with the messy stuff sitting at the bottom of his emotional backpack — parts of himself that he’s been too afraid to touch or understand. He didn’t know for sure. A part of him was concerned that it might be too much for me to handle or too much for me to hold. If it was too much for me, he would be unable to continue on up the mountain.

In his book “On Becoming a Person,” renowned psychologist Carl Rogers writes, “I would like to go with him on the fearful journey into himself, into the buried fear, and hate, and love which he has never been able to flow in him.” Rogers highlights this desire of the therapist, the Emotional Sherpa, to move with and into the tortured parts of the client’s psyche. Unafraid, without judgment, the therapist is eager to get out the picks and shovels and excavate with the client and move closer and deeper toward their more realized and understood self. But before any of this can begin, before a word of real significance is spoken, trust between client and the Emotional Sherpa must be established. And this, of course, does not come easy.

Carl Rogers writes about his client’s struggle to let go and trust the therapist, but his client has fear and reluctance to do so. By meting out a morsel or two to keep the therapist satisfied and engaged, the client tests the Emotional Sherpa’s patience and strength, as if to say, “I know what I’m capable of doing. I know that I can climb a bit higher but I’m not sure you can catch me if I fall.” So this cat-and-mouse game between client and therapist persists.

Then, perhaps there is a breakthrough. After months, and sometimes years, of gaining trust not only in the Emotional Sherpa but also in himself or herself, the client takes a chance and, with it, a big step. And with this big step comes a revelation that “maybe, just maybe, I can ascend higher.” Rogers writes about his client’s desires: “It makes me feel that I want to go further, exploring me, perhaps expressing more of myself.” And with this new sudden courage to move higher, to challenge oneself to dig deeper into the psyche, comes fear — a sudden recognition that the client is no longer thinking of delving to deeper awareness but is now there, at the highest peak he or she has ever reached. Looking down can be terrifying. Vulnerability starts to take effect. Doubt starts to creep in. Anger and fear make way for eventual forgiveness, and the client senses there has been a change. The client has begun to push through prior resistance and with this rebirth, a fright of the new heights. But there is also the recognition that someone is there for the client. Hence, a trusting relationship has been established.

“I don’t want to scare you away,” Alex said to me that night. Scare me away, I thought to myself. I had recalled when I was in Yosemite on a family vacation and, not being too fond of heights, looked down from the ledge into the deep canyon below and noticed how I was completely consumed by my body’s reaction. I was so aware of the shortness of my breath, the tightness in my chest, and the quiver in my legs that I had moved away from my rational mind. For a moment I felt quite unsafe, like I could at any moment fall over the side. But then I reminded myself that I was safe. My client’s words, “I don’t want to scare you away,” were in many ways his version of the deep canyon inside him not wanting to scare me away. In that moment Alex had an intention of wanting me to peer down, but also an awareness that the depths might be frightening for me, and perhaps for him. And if I was frightened by what I might see, and perhaps terrified of falling in, how could I lead us higher? So I simply said to him, “I’m not going anywhere. I’m right here.” Alex thought about that for a moment and then said, “What if you’re not strong enough to catch me?”

Faced with the contradiction of wanting to push himself toward the unknown, but being afraid of taking that first crucial step, Alex is stuck for a moment. Clearly there is a desire to take the risk, an aching to test the limits, but there is also an uncertainty that I will be able to tolerate the weight that might befall me and, therefore, hurt him. The Emotional Sherpa’s job and responsibility in that moment is to assess where the client is on the mountain. Are we about to make a major climb out of a comfortable and safe area, an area to which we’ve allowed time and space to acclimate? Or do we need more time to stay put and think about the strength and readiness of the client? “I don’t want to scare you away” and “What if you’re not strong enough to catch me?” clearly signify to me that Alex is ready to climb higher. This has now become about the Emotional Sherpa’s strength and conditioning in this moment. Alex has moved away from fear of himself and moved toward questioning the therapist’s ability to stay strong in the face of this significant move toward unseen vulnerabilities.

By not overreacting to Alex’s questions and concerns about me I allow the room necessary to be patient, knowing he, through months or years of exploration before, has the capacity to trust. With time, my patience and reverence for my client’s journey up the mountain, and his own recognition of the potential within him, he will continue to climb the mountain of his life. By helping him with his climb higher, and gathering the emotional tools necessary to move higher, Alex will become his own Emotional Sherpa.

My client has a secret. In time he might tell me. Until then, we continue up.