A Story of Disordered Eating, Weight Loss and Bone Health 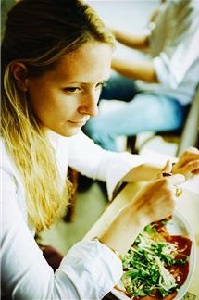 I had my first DXA scan a few weeks ago. My gynecologist felt that it was time I had one, as I’m officially post-menopausal. While I was curious about the results, I wasn’t worried—I’ve done yoga, including various crazy postures that involve balancing my body’s weight on my arms, for many years. I used to teach “aerobics,” as we called group cardio fitness classes back in the day. I mix up my cardio workouts with regular resistance training. I take calcium supplements and try to get my leafy greens in as often as I can remember to go grocery shopping.

And although there were a couple of times when I lost a significant amount of weight and didn’t have my period for a while, my BMI had never been under 18.5. I’d not had anorexia nervosa. In fact, I was overweight for some years. For most of my life after menarche, I had regular and very heavy periods. I figured I’d had plenty of estrogen and that my bones were fine.

You can probably see where this is going. My results told me that I am well into the osteopenia range, bordering on osteoporosis. I met with my gyn a few days ago to go over the results. She explained that the results as reported are based on averages and asked me more questions in order to run a test that would interpret the results in a way that was more pertinent to me as an individual. And what I learned from this is that, while, my hips are actually in OK shape, my spine is not. I have a high risk of fracture in the next ten years if my bone mass doesn’t improve.

Why am I writing about this here, you may ask? Well, here’s the thing: when I was 14, I developed binge eating disorder. Only I didn’t know what it was. In fact, I’d never heard the term, “eating disorder.” All I knew was that I couldn’t stick to a diet. I started dieting in the summer between 8th and 9th grade. I got my period in 8th grade, and that same year noticed that I had gained a few pounds and became very fearful of getting fat. (No one told me that kids naturally gain weight in puberty. I was recently told by Craig Johnson, PhD, Chief Clinical Officer of the Eating Recovery Center in Denver, CO that that average is 40 pounds in 4 years.)

My mother thought that dieting was a good idea, that it would help me be more conscious of my eating habits and my weight. I remember that summer visiting California while on the Harper’s Bazaar 9-Day Wonder Diet. We went to Disneyland and I snuck in the cans of stewed tomatoes required for whatever day that was in using my big purse. On the first day of school, when I was weighed in in P.E. class, I had lost 6 lbs and was exactly where I wanted to be! I remember my height and weight to this day.

But I began craving the foods I’d been denying myself. My “diet” became eating very little for breakfast and lunch and a regular dinner, but by the time I got home from school, I was ravenous and I’d start eating everything I could find in the kitchen cupboard. Once I’d blown my diet, I had to eat everything I wouldn’t be able to have after that day because I would be back on my diet the next day, so I’d make sure to eat anything I knew I’d miss. I spent the next seven years in a binge/diet cycle. I didn’t know it was called bingeing; I just knew I was a pig with no willpower.

And the summer between my junior and senior year of college, I found a self-help program that used language I’d never heard. I learned that I was a compulsive overeater, that I had a disease, that it wasn’t my fault, and that like an alcoholic who must get and stay sober, I had to get and stay abstinent. And I did. I was told to eat three moderate meals a day with nothing in between, and given some literature with guidelines as to what those meals should comprise. Every morning when I woke up, before I got out of bed, I wrote down what I would eat that day, and then called my sponsor and told her. Somehow, I was able to do this. I’d never been able to “stick to a diet,” but I was desperate and resolute. I started losing weight, and I lost something else as well: my period.

I still don’t understand the science behind this. I stopped menstruating shortly after making this radical change in my eating habits, before I’d lost a significant amount of weight. Over the years I spent in the program, I knew of many women who experienced the same phenomenon. I lost about 40 lbs in four or five months, and I didn’t menstruate for eight months. I can only guess that the change in my eating was a shock to my system that somehow affected my body’s ability to produce estrogen. At the time, no one was concerned about this. If the importance of estrogen on bone density was understood, no one I was acquainted with knew about it.

But my period returned, and stuck around for a few years, until I auditioned for a job as a dancer for the Ringling Brothers/Barnum and Bailey circus. Long story short: I had been a theater major at UCLA. After graduation, I pursued an acting career. I auditioned for the circus, proud in my leotard and tights of my newly thin (or so I thought) body. The man behind the table said to me, “Ya dance fine, Honey, but ya gotta lose some weight.” He told me I needed to lose 9 pounds in order to get the job with the circus.

I drove home in tears, and called my sponsor, who talked to me about the different standards of body size for dancers from regular people, and helped me come up with a food plan that would enable me to lose the weight. I did lose that weight, along with—maybe you guessed it—my period. But I also gained something—a lot of attention for my weight loss, a lot of admiration, and requests from many people in the program to be their sponsor. I didn’t menstruate for 18 months. No one was concerned about this. I recall a friend in the program who was having a similar experience: following a food plan that her sponsor recommended had not only enabled her to lose quite a bit of weight, she had also stopped menstruating. My friend told me that when she discussed this with her sponsor, a woman several years our senior, her sponsor said, “So what do you need a period for?”

And we had no answer to that question. We had no idea. It wasn’t until many years later, as a psychotherapist specializing in eating disorders that I learned about the relationship between menstruation, estrogen, and bone density. Bone loss is a serious risk for women who restrict their food intake to such a point that they stop menstruating. Research shows that the effectiveness of inducing menstruation via hormone supplements (e.g., birth control pills) in preventing bone loss is uncertain.

I work with women who haven’t menstruated on their own (without hormonal intervention) for years. When I think that I have lost a critical amount of bone density because of two stretches of time without menses, I fear for these women. I want to plead with them to recognize the danger they are in, to look outside the boundaries of their fear of gaining weight and certainty that their comfort in life rides on being thin. I want them to trust the intricate marvels that are their bodies, to decide that sacrificing their bones for a small body is a price not worth paying.