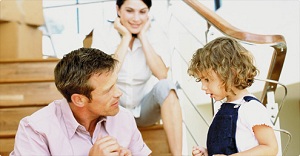 You’ve been divorced for three years and have been working at moving on in your life, establishing new relationships and feeling so much better about yourself than you have in a very long time. You are grateful for your friends and family and the support they have given you.

You have met someone through a good friend who you enjoy spending time with. You both seem to have had similar experiences in ending a marriage with children to coparent. In fact, your children are very close in age and you find it refreshing to talk with each other about them and compare notes, something you never felt able to do with your ex-spouse. You are very excited to be in a relationship with someone you can trust and lean on.

About six months after you met, you agreed it was time to meet each others’ children. You know it is not easy for children to allow a new adult into their lives so you want to be as careful as possible. You expect your ex-husband, Larry will not take it well that you are in a new relationship, however, you know it is better to tell him before you introduce the children to Alan.

This is how many stepparent relationships begin. The first meeting with the children, while it can be quite benign on the surface, makes a strong impression. There are many things to consider when entering into this role:

Most parents don’t discuss their child-rearing theories before becoming parents. This is in part true because new parents don’t know what their favored practices will be. In a blended family, at least one parent has had this experience. Talking through what you believe about discipline, parental authority, levels of strictness, rituals, favorite restaurants, etc. can help avoid painful and upsetting experiences when you come up against strong beliefs that are not necessarily shared. While there may be differences between you, they may not all be of equal importance. Take the time to figure these pieces out before there is a disagreement in front of the children. This is confusing at best and can add fuel to a relationship that may already be stressful for them. For some children, the fact that they like the step parent can create its own problem. Feelings of disloyalty to their biological parent may result in them withdrawing just when you thought you were making some headway with them. That headway could be the reason they are pulling away.

One of the areas that is often a point of contention is about how much authority you will each have with each others’ children. I’m sure you’ve heard of the situation where children tell stepparents they don’t have to listen to them because they are not their real parents. How you each support each other in this regard and the sensitivities in play with the children’s other biological parent, can complicate or facilitate a family life. When at all possible, having all the parents, biological and step, sitting down to discuss what could work is optimal. When this isn’t possible, having an understanding at least with your spouse makes a huge difference.

It is not a given that step parents take on the same roles in parenting as the biological parent does. Stepparents do not always take on the role of disciplinarian. It is often difficult for children to accept a new parent figure in their lives and taking on this role, depending on how the children are faring, may not be the most appropriate decision. The conversation between you and your spouse will be ongoing. These situations go through many changes as the children age and their relationship to a stepparent transforms with time.

Keep in mind that blending families is not unlike blending cultures. Each family creates its own way of doing things, from celebrating holidays to doing the laundry. The more you are able to discuss and compromise before make decisions, the better the prognosis for a conflict-free family life.