Logotherapy: How a Few Questions Can Aid the Grief Process 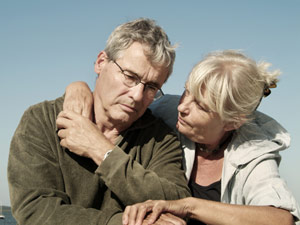 A person I’ve been close to for many years is going through the dying process. It has been slow and painful; at times evoking one of the most beautiful and poignant musical pieces I’ve ever encountered. It is “Agnus Dei” by Samuel Barber, a choral version of his beloved and well-known “Adagio for Strings.” The text is from the Latin mass and includes the phrase, “Have mercy on us.”

Now, mercifully, there is an end in sight for my loved one, but for those she leaves behind, the grief is palpable—at times dull and weighty, at others raw and biting, and frequently overwhelming.

Those who have gone or are going through the grieving process know how often all of our psychic resources are consumed with just getting through another day. It can feel like there is no room for creativity—only emptiness. But grieving presents an opportunity for both creativity and renewal; just as we have been changed by the relationship with our loved one, we will also be changed by the process of navigating through grief.

The weight of grief often feels like being imprisoned. One might wonder whether the pain will ever cease, and sometimes the restoration to function fully and enjoy life can seem far away. I imagine that it’s much like the feeling of a condemned prisoner.

I am reminded of the struggle of Viktor Frankl, an Austrian psychiatrist who founded the discipline of logotherapy (a therapy based on existentialism—not the nihilist variety of much existentialist literature, but one founded in hope and understanding of the power of the individual to find meaning in suffering).

Frankl was imprisoned in four German concentration camps during World War II. He was initially accorded an elevated status because he was a doctor, but eventually he was consigned to the life of an ordinary inmate, not knowing what the outcome of each day would bring. Frankl refused to accept that he might not survive the camps. Realizing the power of thought and creative visualization, he resolved to envision a positive outcome to his ordeal. It was out of this experience that logotherapy was born.

Later, Frankl wrote a small, but powerful, book, titled Man’s Search for Meaning, in which he outlined his struggle and how—through the power of visualization—he triumphed over despair. Part one is devoted to sharing his personal story with the reader, and the second part discusses the essential questions that form the basis of logotherapy: “What is the meaning of this experience for me?” and “How can I have hope for the future?”

Frankl believed that the process of finding answers to these questions would provide a foundation for coping with adversity and a path toward living a more full and fruitful life. This allows for a person to be changed by the experience of their journey. A person can reinvent an understanding of both the journey’s significance and of personal capacity and strength.

Herein lies the connection between grief and creativity. Working through the meaning of the loss creates not only a new self-concept, but also a new worldview.

I often utilize logotherapy in my sessions with people who are dealing with painful issues related to death and dying, grief and loss, adjustment to illness and disability, and caregiver stress. Utilizing the core questions involved in the re-creation of one’s understanding of suffering and the meaning of life has often been equally helpful to those who believe in an afterlife or a higher purpose and those whose envision our mortal life as finite with no overarching meaning. Although I believe this work is difficult to do without the help of a trained professional, merely asking the questions—such as “What does this mean to me?”, “How am I changed by this experience?”, and “How can I go on?”—sets the framework for conceptualizing a beginning, middle, and ultimate ending to the grief process.

If you are finding it difficult to cope with your own losses, perhaps seeking help from an experienced grief counselor who will be present for you, listen, ask the right questions, and guide you through the grief process would be useful. By all means, reach out to others in your support system. Remember that humans have great capacity for resilience, and the process of developing, recognizing, utilizing, and celebrating that resilience is a highly creative one.

It’s OK to be fully present with our sense of loss, but we should try not to lose sight of the promise of change or the expectation of renewal. You can see your way through this loss, and you may be re-created in a way that is most unexpected.