Compulsive Spending: Take the Quiz and Understand the Behavior 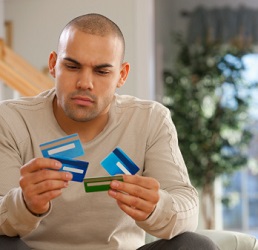 Have you ever found yourself in a shopping mall, searching, with a slightly pounding heart, for something? Something to wear tonight, tomorrow, or for that next important meeting, or perhaps it’s something yet to be thought of, but you know you must need something, or at least you feel like you need something. Maybe you just want something new, what is the difference, right? You are just going to get it and then whatever is really going on will go away, maybe it’s not even that something tragic or problematic is happening, but your mind and emotional system has been wired so that you go shopping, and when you get a new object that will, in turn, whether you acknowledge this or not, assist you in getting rid of something, or help you “deal” with your feelings.

If the scenario listed in the first paragraph sounds familiar, you may want to consider whether you tend toward compulsive buying. To do so, answer each of the following questions with “almost always,” “once in a while,” “infrequently,” or “not at all”:

At the core of many compulsions and addictions lays the untouched, guarded emotional life. A person suffering from a hunger disease such as compulsive spending experiences anxiety because he or she wants something but cannot allow themselves to really know what it is. This knowing would perhaps be too painful to tolerate and hence the compulsion to spend becomes the method of soothing, a frantic race to kill off the thoughts, and acquiring objects of desire with a “magical” credit card, makes the soothing process easy. Then, once the objects are consumed or purchased, a sense of relief surfaces simultaneously along with negative thoughts toward the self for doing something so “stupid.” A repetitious cycle is created because the acquisition provides transient satisfaction, not long-term satiation, and it fuels the compulsion to buy increasingly. The wanting and anticipation of getting the new purse, shoes, or race car contains the most pleasure and is done repeatedly.

In fact, some people buy the same thing over and over, knowingly or not. For example, perhaps a person buys 20 pieces of the same fruit at each grocery store visit whether or not he or she needs them, because the purchase creates a feeling of safety, soothing, and containment over anxiety.

Compulsive spending becomes increasingly severe over time, just like other forms of addiction. Credit cards are maxed out and new cards are obtained until the damage is so severe that serious debt is what leads a person to seek some form of assistance or at least hit rock bottom, and then, get help or start the cycle once again. It is important to understand that the “habit” is not an intellectual problem, but an emotional problem, in the sense that the emotional regulatory system has gone awry and spending is what keeps the system held together.

In his book, Hunger Diseases, Raymond Bettegay defines hunger diseases as the emotional problems a person has based on a lack of self-esteem, so much so that they are driven to possess and consume people and or things in an addictive manner. However, no matter how much they get, it does not feel like enough. The hunger is insatiable. It is thought that these problems derive from childhood when the child’s hunger for closeness, warmth, and stimuli were either inadequately met or inordinately gratified, triggering a recurrent experience of insatiable hunger—a hole or emptiness that must be filled with a constant supply of something. Compulsive spending, too, develops to create homeostasis in an emotional world that seems scary, unstable, and uncertain. The process provides sustenance and recovery requires an intentional transition, just like transitioning a baby from a bottle or from nursing. Recovery requires being attentive to needs, feeling emotions, rather than suppressing them, and responding with insight and care.

Currently, research and clinical experience both indicate that there is no addiction center in the brain and no specific circuits strictly for an addictive purpose. However, the brain systems involved in addiction are among the key organizers and motivators of human emotional life and behavior, which is why addiction has a powerful hold over people. In the book In the Realm of Hungry Ghosts, Gabor Mate designates the three major networks of the brain involved in addictive processes: the opioid apparatus, the brains natural narcotic—the dopamine system, the manager of incentive motivation functions—and the self-regulation system.

The less effective an opioid system is to provide love, pleasure, and pain relief, the more driven a person will be to seek joy or relief through compulsions perceived as rewarding, such as spending money for a new dress or makeup. The dopamine system is triggered during the origination and development of addictive behaviors, such as compulsive spending. The dopamine system is the main strengthener of compulsive spending behavioral patterns because desire, wanting, and craving are all incentive feelings managed by dopamine, while opioids are more responsible for the pleasure-rewards aspect of compulsive spending. Both the opioid circuits and dopamine pathways are important components of the emotional part of the brain. Emotions exist for a very basic purpose, according to Mate, to initiate and maintain activities necessary for survival. So, in essence, they regulate two drives that are essential to human beings: attachment and aversion.

The self-regulation system, technically known as the orbitofrontal cortex (OFC), regulates how a person processes and reacts to emotions. In compulsive spenders, the OFC emotionally overvalues an object of desire or the act of spending, making it the main concern for the compulsive shopper, and sadly, the only concern. The OFC also undervalues other objectives, like making rent, providing for oneself and family members. By becoming triggered even at the thought of a new purse or sunglasses, the OFC encourages craving and neglects its job of impulse control (Mate, 2010).