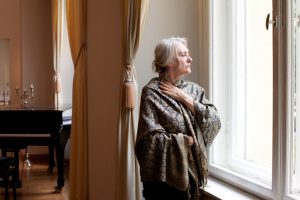 Although the focus of my practice is not on eating disorders specifically, over the years I have worked with several people who initially presented with other complaints (such as anxiety, relationship issues, depression, or chronic pain), but who ultimately revealed preoccupations with weight, size, or specific body parts that indicated disordered body image, eating, and/or exercise behavior. These issues have not been limited to adolescents and young adults, however; I have treated women in the thirties through the sixties whom I would describe as falling somewhere on the eating disorder spectrum.

Years ago I treated a woman in her sixties who came to see me for help managing symptoms related to a painful medical condition. I remember thinking “Tina” was the thinnest ambulatory woman of her age that I’d ever laid eyes on. Tina’s eating disorder had been her constant companion for longer than any actual person in her life, having first appeared when she was in her early teens. She described herself as having been noticeably overweight as an adolescent, and still recalled the scathing criticisms of her father, who called her “fat” and otherwise berated her on a daily basis. Tina later married a man who used a similar ruler to evaluate her worth and “punish” her, which only reinforced her behavior.

Although she was, at 5-foot-10 and 110 pounds, clearly quite underweight, her clothing hanging on her now-wasted body, she retained the core beliefs that she was both unlovable and that her “fat” was responsible for this in some way. In her youth, Tina had alternatingly restricted, binged, purged, and used laxatives in an effort to shed both weight and profound self-loathing; in later years, she solely restricted. At some point, however, she had regained sufficient weight to become pregnant and carry to term. Tina’s behavior had changed over the years, but her assessment of herself had not, and she continued to deny herself both actual and metaphorical self-nourishment.

Body-image issues can worsen, re-emerge, or first appear in later life for a number of reasons. Among them are hormonal changes, as well as changes in relationship status, professional role, and one’s family structure. In addition, the standard of women’s worth being too often measured by their attractiveness, and more specifically, a youthful attractiveness, has the potential to further enhance dissatisfaction with a changing body. Although I believe it is too simple to blame late-life eating disorders on the relative dearth in popular culture of “normal-looking” women in their forties and beyond, I do not think it helps to see one’s famous contemporaries touting that “40 is the new 30,” implying that looking eternally youthful is both a given and an imperative. For most (noncelebrity) people, that’s a debatable assertion at best.

I’d like to think that most of us know that the forties, fifties, sixties and beyond can be productive, satisfying, and physically healthy stages marked by secure relationships, perhaps professional achievements, and hopefully, growing self-acceptance—based on less necessarily changeable qualities than appearance. By no means am I asserting that this acceptance is easy; it is almost more “normal” than not to have concerns and psychological adjustments related to an ever-changing body and face in our appearance-obsessed American culture. Who among us has not lamented a few extra pounds, slackening skin, or the emergence of crow’s feet? Perhaps the challenge, then, is for the goal to be a continual effort to acknowledge and accept our feelings—both positive and negative—about growing older, and seek to re-center emotionally, redefine what gives us “worth,” and to allow other pieces of the “pie” of our lives to be larger than the one taken up by appearance concerns.

Some warning signs of a possible later-life eating disorder:

Later-life eating disorders come with health risks, including greater risk of developing osteoporosis and heart problems. When evaluating someone for a possible later-life eating disorder, it is important to remember that one sign present in younger women—the cessation of menses—will not be a reliable factor for perimenopausal women, and will be irrelevant for postmenopausal women. Furthermore, one must consider other medical or psychiatric diagnoses that may explain or further complicate weight loss in this and other age groups. These include the presence of significant anxiety, depression, personality issues that are frequently comorbid with disordered eating (such as borderline, narcissistic, histrionic, and obsessive compulsion), digestive disorders, pancreatitis, substance-use disorders, and other issues.

Other issues to consider include that the eating-disordered person may very likely be in denial about the problem and resist efforts by family and friends to discuss their concerns. Additionally, the “benefits” of weight loss, including decreasing numbers on the scale, wearing a smaller size, and external validation about the weight loss, tend to reinforce the behaviors associated with it, making it even more difficult to acknowledge a problem. In particular, well-intended friends, family members, and even health-care providers can compound the problem by praising someone’s achieving a lower weight, particularly if they were overweight before.