Coming of Age in Divisive Times: The Power of Fantasy and the Arts 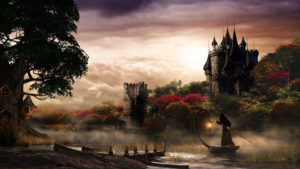 The specific era in which a person begins to bridge the gap between childhood and adulthood doesn’t matter, relative to one prevailing fact: it is difficult. Volumes of the world’s literature are devoted to this phase of development, acknowledging the fundamental nature of coming of age as one of life’s greatest crucibles. Psychologists call it individuation, a time in which a healthy young person extricates themselves from the known world of childhood and forges an independent personality and experience.

In a perfect world, this struggle has two distinct poles: enmeshment (in the family unit as a child) and independent identity (as an adult in the world). The result of the struggle is the psychosocial location of an individual, which is the basis for their future and the point of view from which all that is to follow is experienced.

But never in history has the world been perfect. The struggle is messy and often incomplete until well into what we would call adulthood: what becomes, for many, a life of work, mortgages, and child-rearing.

What Role Does Higher Education Play in Individuation?

The concept of psychological adolescence itself is relatively new. As most people know, children historically worked in the fields, in the mines, and later in workshops. It wasn’t until after World War II that Western cultures provided the opportunity for the extended time of self-discovery we call the teenage years, as millions of baby boomers left their burgeoning high schools for university campuses and the wide world of liberal education.

College days were for academics, of course. But an equally significant aspect of the four years of college was the time spent exploring what it means to be human, and to be one unique human being in particular. What was studied in class was pondered and discussed and challenged. Through the informal means of sharing questions with peers, hearing converging points of view, and discovering conflicting values, coursework became integrated into personhood. College was a living science experiment, and the result was self-awareness and a sense of responsibility to others beyond oneself.

This is the part of higher education that is often left out of arguments declaring the uselessness of college degrees, specifically degrees in the liberal arts, which are at times devalued and even ridiculed. In my opinion, this denigration is a tragedy.

Liberal does not describe politics in this context. It refers to the freedom encountered by the open mind. And with freedom comes responsibility, which Freud acknowledged as the reason many fear it. Gradual exposure to and development of the notion of responsibility is one of the fruits of liberal education. Without exposure to the liberal arts, where will our thinkers come from? Who will be poised to discern the greater welfare? How will compassion erupt from a field devoid of the experiences engendered by self-exploration and exposure to the vast world presented to college students in literature classes, through philosophy, through art? And if there is no sense of history and the nature of human cycles, where will temperance come from?

Gradual exposure to and development of the notion of responsibility is one of the fruits of liberal education. Without exposure to the liberal arts, where will our thinkers come from?

Sensitive young people today continue to struggle with these questions. Many are still drawn to the liberal arts in a culture that values STEM (science, technology, engineering, and math) degrees. They may be tuned into nuance and subtlety by nature of their intelligence and emerging maturity, but they are growing up in a divisive culture in which these characteristics are often trampled in the public square, where false equivalencies seem to abound and divide.

Before they know where they stand, they may see that making determinations about their own values will probably align them, like it or not, with one side or another in the culture wars of zero-sum politics. But STEM degrees are simply not for everyone. And industry is beginning to show that more is necessary for success in the workplace than technical knowledge of a field, as Google recently revealed.

Using Fantasy to Cope with Difficulty and Distress

Many therapists may be increasingly seeing a manifestation of this heightened sense of not fitting in, not to mention the other pressures facing today’s young adults, in young people seeking help who prefer to discuss with fervor their fantasy worlds of elves, unicorns, and diverse realms of the imagination. Generally, it is not prudent for us to pathologize this. More often than not, an intense focus on fantasy indicates life distress that points directly to the difficulty of coming of age in these divisive times. As a therapist, I open a discussion to explore the personal particulars of this difficulty in the hopes of helping those I work with develop skills for understanding the world around them.

My goal is to help them bring into their daily lives the same energy and determination that allows them to challenge evil and dragons in the worlds of their imaginations, even in the face of what seems like great odds. There is power in these strong attachments to imaginary creatures and dilemmas. To channel the power into an adolescent’s path toward maturity can further personal growth and help the adolescent become a strong individual. The touchstones for confidence derived from fantasy attachments can easily last a lifetime.

The divisive nature of today’s political environment is part of a cycle, one that, I believe, will pass. History is full of examples left to us by those who faced these struggles before us. The contributions of Goethe. Michelangelo. Shakespeare stand alongside those of Galileo, Curie, and Einstein. Together, their imaginations have kept the flame lit for us for generations. As always, our youth is our hope.

If struggles in the realm of the imagination can help youth navigate reality, as a tool these struggles become powerful. Unicorns and elves have potent magic, and I believe it is of benefit to let our youth be guided by their symbolic value, not dismissed as escapists.

We can begin with the small step of acknowledging the undue pressure we place on students whose natures lead them toward the liberal arts, and we can continue by allowing them their fantasies. Middle Earth has much to offer, and who are we to judge the chosen instrument of deliverance for a generation? We are not of their time. We do not know. We can only offer support and do our best to keep from harm those who come after us.

Strauss, V. (2017, December 20). The surprising thing Google learned about its employees—and what it means for today’s students. The Washington Post. Retrieved from https://www.washingtonpost.com/news/answer-sheet/wp/2017/12/20/the-surprising-thing-google-learned-about-its-employees-and-what-it-means-for-todays-students/?utm_term=.b9239650a30d