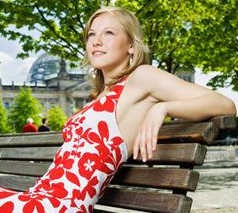 Many people, but primarily young, educated, Western women, struggle to sustain a positive body image—for a multitude of reasons that have been discussed in previous posts. Often a negative body image leads to a poor relationship with the body and other aspects of self. It is associated with impoverished self-care and unhealthy eating and lifestyle habits.

Having a negative body image is related to general low self-esteem and depression or anxiety. Women with poor body image often struggle with boundaries in relationship to self and others. In this post, I will attempt to shed some light on the issue of boundaries related to poor body image, a concept often discussed and infrequently understood.

Women with poor body image tend to have a compartmentalized approach to well-being. For example, they may be overly focused on certain parts of the body or particular goals, such as weight loss, while devaluing other important aspects of overall health and fitness. People who have poor body image demonstrate an all-or-nothing approach to wellness, swinging from one extreme to the other, sometimes within the same day. They tend to have an exceptional level of acquired knowledge about what is healthy and set idealistic goals based on this knowledge and also are frequently disappointed and blame themselves when they are unable to attain these goals.

The lack of a holistic perspective is evidenced in an inability to balance fitness with relaxation, healthy food choices with enjoyment of food, and so on. Not surprisingly, it is common to hear that they have dissatisfying relationships with others. The all-or-nothing tendency is implicated in their sense of being overwhelmed in relationships. They sometimes become preoccupied with the other person, swinging from feeling too close to feeling uncomfortably vulnerable even feeling lost in a relationship and wanting to cut it off.

The biggest and most obvious issue I see in working with women with poor body image is that most of the information used to make decisions about relationships and well-being comes from external sources. A total and complete lack of trust in the body and the self’s ability to regulate is obvious in their decision making. There is usually a clear history in the development of this lack of trust with regard to personal, familial, and cultural messages that have been internalized. (A full discussion of these factors is beyond the scope of this article). A lack of trust in the body and in the self leads to poor listening and misinterpretation of the cues that emerge from within. After a prolonged period of not paying attention to these signals, one’s ability to understand and act in accordance to one’s own needs becomes weakened. The needs of others become the focus of too much energy and attention, often referred to as a boundary issue.

Boundaries can be physical, mental, or emotional. Clear boundary violations are easy to identify and are well known as something that is usually morally or legally wrong and/or clearly harmful to another person’s safety, integrity, or well-being. However, there is a huge gray area between what is ideal and what is harmful, and sometimes subtle violations can lead to hurt, shame, self-doubt, and low self-esteem. Violations usually happen by the person who is in a perceived position of power, as in the obvious case of an adult taking advantage of or imposing his or her personal needs on a child, or a doctor over a patient. But there are other relationships in which people can feel vulnerable and open to influence, harmful or positive. In these more subtle cases of power and vulnerability, the delivery of emotional (or more direct) messages about the self can also lead to unhealthy attitudes, self-doubt, and low self-worth. For example, people in positions of perceived or felt power who regularly directly or indirectly impose their opinions and choices can influence others to have doubts about their own choices.

A healthy boundary between people is a perceived buffering zone, whereby a felt sense of acceptable difference exists. Respectful support of differences by people in positions of perceived power and influence can help a person grow a strong sense of self and hence the ability to re-enact these perceived boundaries in other relationships. Good boundaries lead to healthy awareness of needs of the self and also positive choices that enhance the sense of self and relationships. Supporting an individual’s development involves a strong sense of self and honoring differences in others, an open attitude of acceptance and humility. A supportive stance involves allowing another person to feel, think, struggle, learn, and identify what is right for him or her without unwelcome advice or control tactics or too much distance or silence.

Recognizing and accepting differences, a supportive stance, involves sharing personal views and opinions with a sense of humility and recognizing that they are indeed personal and individual and should not be imposed on others. Offering help when it is asked for and refraining from taking over, micromanaging, or rescuing another person is important. Healthy boundaries lead to healthy relationships, and healthy relationships lead to healthy development of individuals.

Where the development of healthy boundaries has been challenged, an individual will often be overly dependent on external information and feedback to feel safe in their decision making and hence may have a poorly developed or negative sense of their own worth. In the case of the person with poor body image, this person becomes adept at information gathering, using perceived feedback to set expectations for the self that are often unrealistic. Perception itself is flawed and is often skewed towards negative, self-fulfilling ideas of self-worth. By engaging in a selection bias, people with low self-esteem will seek out and attend to cues that confirm what they think they know about themselves that is usually negative. In addition, they may believe it is possible to please others all of the time, which is clearly faulty.

Emphasis on interpretation and internalization of other people’s expectations is a recipe for impoverished self-worth. Living according to perceived notions of other people’s expectations often leads to repressed resentment, disempowerment, and disappointment. In some cases, the only way to assert the self is in a passive-aggressive manner, which is usually not received well by others. While indeed it is healthy to have a sense of social expectation and be kind and thoughtful towards others, these behaviors need to be enacted based on a clear and healthy sense of self, which requires an awareness of personal thoughts, beliefs, feelings, and needs and the differences between self and other. Healthy self and healthy relationships interrelate and influence the development of both. The development of clear boundaries has a positive impact on individuals and on others with whom they have relationships.

However, the responsibility for nurturing clear boundaries falls on individuals in a position of power of any kind. Most people in some domain of their lives are in a position to help or hinder the development of another person. It is important that we always be aware of the difference between our own needs and feelings and those of others and to refrain from overstepping and imposing or, conversely, mistakenly taking on responsibility for other people in a way that invalidates or challenges their own development.

Where boundaries were violated, or not properly developed, psychotherapy can help to personalize new ways of being that include more emotional self-awareness and self-regulation, as well as assertiveness and effective communication skills. Healthy boundaries and self-esteem are achievable goals.