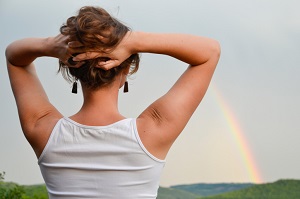 When it comes to bisexuality the myths abound, including the one that bisexuality doesn’t exist. This denial and dismissal of a large part of one’s identity negatively affects one’s self-esteem and sense of connection, which are vital parts of well-being.

Identity begins forming very early in life and comes from many sources. We enter the world with certain immutable identities: baby sister, midwesterner, Latino. Other identities are given to us by family and friends: Jewish, shy, athletic. Our sexual identities come about much later, usually during the preteen years, when we are trying to decide which of the labels we were given actually fit and which we want or need to change. The teenage years are all about this process of figuring out who we are, mainly by feeling a connection to certain other people and groups.

Most of us are exposed to many life options during our youth. We grow up aware that many different religions are practiced in our country; there are many styles of dress, thousands of different colleges and occupations to choose from, and so on. When it comes to sexuality, however, traditionally there have been only two options in our culture—you are either male or female and attracted to the “opposite” sex.

With the growing visibility and voice of the gay community, a second option for sexuality is gradually being accepted: that of being attracted to those of the same sex. This is a good thing, but it still doesn’t make space for those identifying as bisexual (or polyamorous/pansexual/omnisexual), who usually get relegated to either the gay or straight categories. (Myth: If you are partnered with someone of the opposite sex, you are straight; if with the same sex, gay. Myth: If you are attracted to both males and females, you are gay and afraid to come out.)

Even when it is acknowledged that bisexuality exists, other myths denigrate this population by claiming that it is impossible for a bisexual person to remain faithful in a relationship, that he or she is afraid of commitment, that he or she is more likely to have sexually transmitted diseases, and so on. Historically, the gay community has not been any more accepting of bisexuality than the heterosexual community. Nor has the scientific community. Until the 1990s, few, if any, studies were done of the bisexual population; researchers were into denial as well.

This left those identifying as bisexual in the same marginal position in society that so many other minorities were and are in. How can you trust what you know and believe when so many others are telling you that you are wrong? How do you feel good about yourself when society says you don’t exist or are contemptible? Where do you fit in? Where do you feel you can be yourself?

In the past, finding others like yourself may have been very difficult. However, the abundance of communication provided by the Internet has been a blessing to many disenfranchised people. More and more websites and blogs are dedicated to people who are bisexual and to their concerns. As with the gay community, being visible opens the doors to connection, union, and political voice.

More personal support can also be found by way of the web, local LGBT associations, or publications. As a therapist, I see more and more courses being offered on bisexual issues and on affirmative therapy with people who are bisexual. The more aware the general public is, the safer it is for people to come out into the open. And when you don’t have to hide parts of yourself, you feel better. Visibility has been credited by many for the rise in acceptance of those who are gay. It can work for people who are bisexual as well. And there is reason to be positive—it was recently announced that the White House will hold a closed-door session on bisexual issues. This kind of acknowledgement is a giant leap forward.