Beyond Coming Out: Supporting Your LGBTQ Teenager 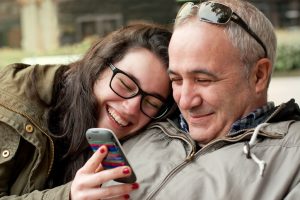 Your child came out to you and you’ve all made it through to the other side. Now what? How can you support your lesbian, gay, bisexual, transgender, or queer (LGBTQ) teenager as they move from childhood to adulthood?

There are as many experiences of being LGBTQ as there are LGBTQ teenagers. Below are four general guidelines to help you and your family support your child.

1. Expand what is possible.

We live in a world where people are considered “straight” and cisgendered (a person whose gender identity matches the gender they were assigned at birth) unless proven otherwise. Because of this, parents and youth alike have narratives about what the future holds based on the assumptions of heterosexuality and a cisgender gender. Coming to an understanding that your child’s sexual orientation or gender identity is not what you thought means that you need to rewrite all of those stories about the future. Losing those stories, those dreams of what is possible, can feel terrible.

Many parents had dreams of marriage and grandchildren that now seem impossible, or at least unlikely. Part of accepting a LGBTQ child is acknowledging that these dreams for the future might need to change, and it’s OK to be upset about it. It is also an opportunity for you and your family to reimagine your future. Being LGBTQ in 2014 is a completely different experience than it was even 10 years ago. This might be a good time to turn to your child and learn from them. What do they see in their future? What are their dreams? Together, you and your family can expand what is possible for all of you.

The tricky thing about adolescence is the way it bridges childhood and adulthood. Teenagers are still children in the sense that they need their parents’ love and affection. Having a supportive family plays a huge role in helping a LGBTQ youth feel good about themselves. It might not seem like you actually need to say out loud to your child that you love them regardless of their sexual orientation, but it is important for them to hear it.

Many children are not met with love and understanding when they come out to their families, and this narrative is a part of the greater LGBTQ story. Youth may worry about being disowned or rejected because of their sexual orientation even when it’s clear they are part of a supportive family. What are the things you can continue to do to let your child know you love them unconditionally?

Adolescent development is all about connecting with other teenagers. It’s how we each learned to be the adults we are today. LGBTQ youth need to be able to connect to other teenagers who accept them for who they are.

These connections might not always be in the places you expect. For example, many youth who live in more rural communities might find connection through online sites or message boards. Real-life connection tends to be better, but isn’t always possible. Where are the places that your child can connect with people who “get” them?

4. Make sure you get support.

Your child is lucky to have you as a support. Now who is going to support you? It’s completely normal to have feelings of grief, disappointment, or fear when your child comes out. It doesn’t make you a bad parent or a bad person, and it’s important to have spaces where you can talk to people about all the feelings you have, including pride and empathy.

Where are the places in your life where you feel connected to people who respect and understand you? This might be at work, among family, or with a group of friends. Sometimes, seeing a therapist is a good way to have a completely nonjudgmental space for you to talk about your feelings. PFLAG (Parents and Friends of Lesbians and Gays) can also be a great place to connect with other parents or caregivers. If you have a partner, what is it like talking with them about it? Can you provide support for each other?

Parenting a teenager who is LGBTQ can be challenging not because of your child’s sexual orientation, but because of what other people think of their sexual orientation. This is a subtle but important difference. Recognizing this difference can shift feelings of frustration away from your family and toward the outside world where the negative messages and experiences are happening.