Babies Begin Learning to Speak Early in Life, and Other News 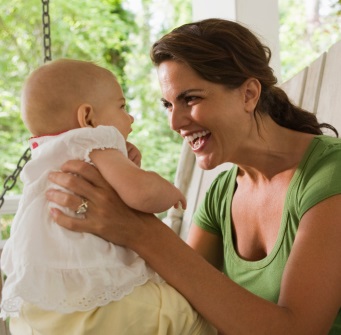 According to a new study, the process of learning to speak may begin earlier than previously thought. Four-month-old babies who were taught to pay attention to complex audio patterns were able to learn to shift their eyes when a pattern changed slightly. At seven months, brain scans of the same babies showed that they were quicker and better at noticing language-related sounds than babies who weren’t exposed to the audio patterns.

Babies survey their environment for language-like sounds many months before they begin speaking, the study’s authors say, and the time between four and seven months may be an early period during which babies learn how to detect and respond to language. By making language detection into a fun game, researchers were able to help babies learn what to pay attention to. It may be that parents can do the same by talking to their babies and rewarding them for paying attention.

Cupcakes are usually brightly colored and cheery. For the Depressed Cake Shop, though, cupcakes take on gloomier hues of gray and black, but for a good cause. These pop-up sweet shops sell “depressed” cupcakes to raise money for mental health charities. So far, the cake shops have raised more than $50,000.

What Are the Adult Health Consequences of Childhood Bullying?

According to a British study of 7,771 children that began in 1958, the effects of bullying extend well into adulthood. Twenty-eight percent of these children were periodically bullied, while 15% were frequently bullied. Compared to the group of children that did not experience bullying, bullied children had less adulthood social support, were more likely to be unemployed, had lower levels of educational attainment, and were less likely to be in a relationship.

Decreased Ability to Identify Odors Can Predict Death: Olfactory Dysfunction Is a Harbinger of Mortality

A failing ability to detect smell could be a signal of physiological decay that will ultimately lead to death. Thirty-nine percent of study participants who failed an odor detection test died within five years of the test, compared to 19% with moderate smell loss and only 10% of participants with a healthy sense of smell.

A study on the effects of physical activity on episodic memory—a form of long-term, autobiographical memory—has found that lifting weights may boost memory. Researchers found that following an intense workout lasting 20 minutes, episodic memory improved by about 10%.