Are Social Media Good for Your Marriage? 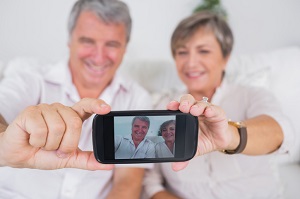 You can’t go more than a few days without reading something about how social media is bad for relationships. Internet matchmaking sites might be the latest and greatest way to meet people, but they can also open up the door for infidelity. Facebook and other social networking sites bring old flames together and can offer virtual shoulders for lonely spouses to cry on. Emotional affairs are rampant on the internet, and businesses have popped up catering to unhappy married people looking to cheat on their partners. None of these scenarios seems to offer significant benefits to relationships or seems like good ways to strengthen a marriage.

But according to a recent study, people who talk about their relationships on Facebook tend to have more relationship satisfaction and report high levels of marital security. Laura R. Saslow of the Osher Center for Integrative Medicine at the University of California San Francisco led the study and found that in three separate experiments, people who posted pictures with their spouses were happier than those who did not. Likewise, those who talked positively about their relationships online were happier than those who did not. And the happiest married couples were more likely to post couple information and pictures on Facebook.

Amy Muise, a co-author of the study, said, “It makes sense that someone who’s happier with their life would post these kinds of pictures to show off their relationship.” However, that does not mean that all social networking activity is good for a relationship. The University of Missouri-Columbia recently revealed that their research shows that excessive Facebook use can cause relationship conflict. Is Facebook good or bad for your relationship? Can it harm or help intimacy? According to experts and years of research, it just depends on how you use it.