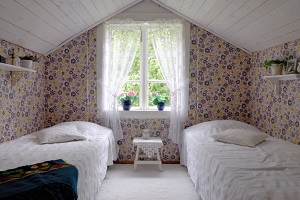 Fifty years ago, the mere insinuation of marital sex was so scandalous that television producers put sitcom couples in separate beds, occasionally even in separate bedrooms. Whether they’re aware of it or not, most people know at least one couple who lay their heads in separate beds or bedrooms. One 2005 survey found that as many as a quarter of married couples sleep in separate rooms. In part because separate bedrooms are associated with a more prudish era and with older couples who may be less physically intimate, many people view the arrangement as the death knell of younger marriages, but separate bedrooms don’t have to mean anything—except, perhaps, that both parties get a good night’s sleep.

The prevailing cultural belief is that it’s normal and natural for married couples to sleep in the same bedroom. This trend, however, is a relatively new one. Prior to the 19th century, separate bedrooms were a status symbol indicating couples could afford two master bedrooms. Cultures around the world have a variety of sleeping arrangements; in some places, married couples never share a bed.

In a culture that places a strong emphasis on marital intimacy, separate bedrooms might seem unhealthy for a relationship. People give many reasons for moving to separate bedrooms, though, and some of them have little to do with the relationship itself. Different sleep habits can play a role; when one partner is a night owl and the other needs to get up early, sleeping in the same bedroom can be exhausting. Snoring and other nighttime habits can also drive couples into separate bedrooms. Disagreements about how to sleep—whether to allow children or pets to be present, for example—can also be a factor. And in some marriages, couples simply don’t want to sleep together, need space at night, or sleep separately because they’re no longer interested in physical intimacy.

Couples who sleep apart can gain some surprising benefits. One 2012 study found that couples reported less happiness in their marriage when they were sleep deprived. If one partner snores or otherwise interferes with sleep, or if the couple sleeps better separately, separate bedrooms can improve a marriage. Separate bedrooms can also add to the excitement of sex; being in the same bed may feel novel, and may even involve some sneaking around if there are children in the house. For couples who fight about their sleep philosophies, moving to separate bedrooms can mark the beginning of peace.