When Ambivalence Becomes a Chronic Pattern in Relationships 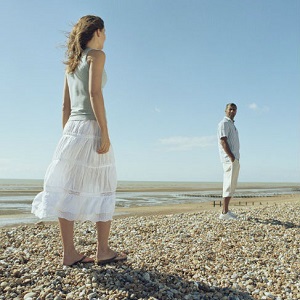 This article discusses the nature of ambivalence in relationships and the resulting dynamics. My perspective on this topic has developed over the past 20 years of working with individuals and couples and noticing how these dynamics emerge.

Ambivalence occurs in intimate relationships when there is a coexistence of opposing emotions and desires towards the other person that creates an uncertainty about being in the relationship.

It is our nature to split our experience into polarities, such as good/bad or right/wrong and emotions such as love/hate, joy/sadness. One could say that we constantly deal with the opposite of our experience even if that is unconscious. As we become closer to our beloved and feel connected to them, our experience is defined by the possibility of separation. Every time we say “yes” there is a “no” in the background informing our choice.

If I am saying “yes” to something wholeheartedly, I can feel that yes in every cell of my being. “No” has been considered and rejected, however fleetingly, and my “yes” has the quality of certainty. If my desire to say “no” interferes with my “yes,” it will be said with hesitation and doubt, and a lingering uneasy feeling that causes me to hold back; I am unable to fully commit to that “yes.” So not only does the opposite polarity define my experience but the degree to which I have integrated it into my consciousness will also affect my experience. Ambivalence could be said to occur when we are stuck between two polarities, and unable to reconcile them.

All relationships contain opposing desires at times; this is the essence of conflict. The degree to which both ends of any polarity are conscious or hidden will affect how partners deal with conflict between them. In addition, how much each individual identifies with one end of the polarity will also determine the ability to resolve conflict.

For example; if I identify with being kind and cannot tolerate the notion that I can be unkind, the unkind aspects to my psyche will become unconscious and drain energy away from my ability to be kind. I will not be fully present or authentic in my acts of kindness, and in all likelihood project ‘unkindness’ on to my partner. By being rigidly identified with one end of a polarity and blocking awareness of the intolerable aspect means we cannot be fully present. If both individuals in a relationship are identifying their nature in this way, then what they create between them will also be an inability to tolerate certain experiences and make resolving conflict difficult.

A Chronic Pattern of Ambivalence

So if the nature of ambivalence is the inability to resolve an internal conflict that results in a lack of presence; a common way of expressing this is confusion. Ambivalence and confusion can be temporary states in all relationships, as we take time to resolve opposing or new information. However, where ambivalence becomes a chronic response to the world, confusion can become a defensive stance that protects us from being fully present. Expressing confusion habitually regarding what we want or need reinforces our sense of helplessness. “I don’t know” does not give us a sense of mastery over our world, nor does it give our partner anything to go on. The inability of either partner to move forward in the relationship, either to leave or to move closer, reinforces this helplessness. This chronic pattern becomes a problem in relationships by inhibiting deeper intimacy.

A chronic pattern of ambivalence typically generates a dynamic in relationships where one partner is identified as uncommitted and the other as wanting commitment. Each partner will develop behaviors around this conflict in an attempt to pull their partner closer, or push them away. Each partner is expressing a particular role in the conflict over being in the relationship or out of it, but essentially both partners are creating the ambivalent tension between them by being identified with one end of the polarity.

In other words, if we were to reduce this to a simple yes and no—the two ends of a polarity would be, “yes I want more with you” and “no I do not want more with you.” Partners are identified with either yes or no, and between them creating a stalemate. We can assume from this that both partners have not resolved their own internal ambivalence as neither of them can commit themselves to either being in or out of the relationship, and neither of them, in this dynamic, are fully engaged with the other. Often as one moves away the other will express more desire for the relationship, and the ‘certainty’ expressed by the committed partner is a desire to hold on in reaction to the greater pulling away of the other.

Because ambivalence pulls the individual and the relationship in different directions there is an atmosphere of uncertainty and unpredictability that creates instability between the partners. There can be an atmosphere of impending doom and dissolution of the relationship. Partners often breakup many times, or threaten to breakup. As time goes on the relationship takes on the characteristics of an emotional roller coaster where they alternate between feeling hopeful and breaking up. Within this atmosphere, it can be very difficult for both partners to be themselves, and be open with each other. When faced with the possibility that it will end at any moment, anything that either of them believes could cause the relationship to end will be denied or held back. As each partner withholds aspects of himself or herself from the other, this creates distance, and thereby increases anxiety over the possibility of separation. It becomes a vicious circle.

Typically, the partner who expresses commitment feels hurt and rejected by the other. The feeling that they are not good enough for the other to fully commit to them creates a reaction of trying to please, in the hopes of increasing the other partner’s desire to stay. The partner who carries more uncertainty often feels guilty that they are not able to give more, and finds it increasingly difficult to voice their true feelings. They start to dance around each other—trying to anticipate how the other is going to react, and holding back thoughts, feelings, or desires if they think their partner will react badly to them. In this way the relationship becomes more and more dishonest.

Both partners are in a relationship that isn’t the way they want it to be, but neither is able to leave. This is the essence of ambivalence. The preoccupation with separation, either wanting more separation, or being afraid of separation from the other, is the foundation of the anxiety that the relationship sits on. This preoccupation means that each individual cannot rest in the relationship; it is not a place of sanctuary and support but a place of deprivation. Even though there may be times where both partners can have fun and feel connected it is short lived, as both partners carry an underlying dissatisfaction that doesn’t get resolved. A lot of time and energy gets taken up dealing with this underlying anxiety and deprivation.

From this perspective, the alternative to living with a chronic pattern of ambivalence would be to resolve internal conflicts that prevent one from taking action, making decisions, expressing how you feel, and being fully present. Issues around connection, intimacy, and separation are often at the root of an ambivalent stance. To be fully here is to accept the fragility and imperfections of life, to “go for it” despite the possibility it could be gone in the next moment.

© Copyright 2007 by By Delyse Ledgard, MA. All Rights Reserved. Permission to publish granted to GoodTherapy.org.