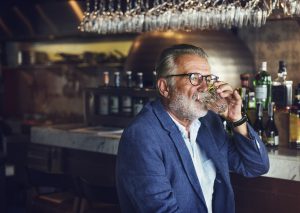 Alcohol abuse among adults age 50 and older is increasing, according to a report published in the journal Drug and Alcohol Dependence. Older Americans are more likely to use alcohol than any other drug. The study is the first among recent studies to explore alcohol use trends of older adults. According to the National Institute on Alcohol Abuse and Alcoholism, alcohol is the fourth-leading preventable cause of death, killing 88,000 people each year.

Alcohol Use Among Older Americans

Researchers gathered data on adults age 50 and older from the National Survey on Drug Use and Health for years 2005-2014. The survey relies on self-reports of alcohol use. The study found a 19.2% increase in binge drinking over nine years and a 23.3% increase in alcohol use conditions.

Adults who reported being in “poor” or “fair” health, as well as those with chronic medical conditions, saw significant increases in binge drinking.

The study’s authors say medication use and age-related health changes make senior alcohol abuse more problematic. Women are especially vulnerable, as age-related changes in lean body mass make it easier for women to become intoxicated with a smaller amount of alcohol. They also point to the social risks of excessive alcohol use. Both men and women may find themselves in dangerous sexual situations, though women are more likely to be sexually assaulted while under the influence.

Alcohol can elevate blood pressure, damage the liver, and exacerbate some chronic illnesses, making them more difficult to manage and potentially leading to a higher risk of injury. Some research links alcohol to dementia. Alcohol abuse can also trigger a form of memory loss called Korsakoff syndrome, with symptoms that mimic dementia.