The Basics of Bullying and How to Stop It 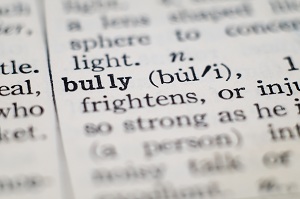 There are those who say that bullying is behind all forms of violence, conflict, persecution, abuse, harassment, discrimination, and prejudice.

The death of Phoebe Prince in 2010, a 15-year-old Massachusetts girl who hanged herself after being harassed by a group of students from her school, puts a spotlight on bullying among teenagers. And in fact, there have been many notable cases of teen bullying, on and off the Internet (i.e., cyber-taunting on Facebook) that come to mind when we think of bullies.

However, it isn’t just children and teenagers who bully. Although it may not be as obvious, or as easily identifiable, adult bullying may be more widespread. “Independent research suggests that bullying is happening to around 1 in 4 people” (from “Life After Adult Bullying”). Bullying impacts many of us, regardless of our age.

Bullying is defined as “an act of repeated aggressive behavior in order to intentionally hurt another person, physically or mentally” (Wikipedia). It is characterized as behaving in a manner to gain power over another person. And it is a form of abuse. I would suggest that if you rephrase the descriptive action from “repeated aggressive behavior” to “taking frustrations out” on those who are weaker or different, bullying becomes a much more commonplace and identifiable act. In fact, it is pervasive.

There are different types of bullies and different environments in which they proliferate. There are verbal bullies, physical bullies, serial bullies, gang bullies, cyber bullies, subordinate bullies, unwitting bullies, work bullies, sadistic bullies, and psychotic and sociopathic bullies. There are bullies at work, at home, in schools, in governments, in religious organizations, on the Internet, and in social cliques.

What Kind of People Bully?

Usually people with low self-esteem and a certain amount of unconscious resentment (envy, jealously) that pushes the bully to project their own feelings of inadequacy onto you while denying that anything is wrong with them. Not all bullies are serial bullies. Sometimes the average person loses it under pressure and takes out their feelings in a bullying manner. But regardless of how or why it is happening to you, it is not acceptable.

What all bullies have in common is the use of power to satisfy one’s own psychological shortcomings. Each time a bully moves against someone weaker, he/she feels better about themselves for an instant. But because that feeling doesn’t last, they do it again and again. Sometimes the bully appears to lack insight into their own behavior (unwitting bully), but more often the bully does know yet elects to ignore the moral and ethical considerations by which the majority of people are bound. The rules don’t apply to them. Or they have projected so much self-hatred on the other that they truly believe that those they are bullying deserve exactly what they are getting.

Why Are There So Many Bullies in Society?

One of the reasons bullying is so prevalent is because most bullies commit non-arrestable offenses. And so bullying becomes unconsciously acceptable. It’s an outlet–a way to express–frustration and/or rage.

There are adult bullies we can easily identify. Hitler was a bully; racists are bullies. Parents and older siblings have been known to bully. Certainly, gang members bully. But what about those who threaten, shame, or intimidate you into doing things you don’t really want to do? It happens to most of us, and when it does, we are being bullied. Even when it comes from a person or institution that you love, respect, admire–your government, your church, your significant other, a family member, a professional colleague. Sometimes there is a fine line between harmless coercion and harmful bullying. But you can feel the difference. You know when you are truly ambivalent and open to being talked into something versus when you are being pressed against your better instincts, wishes, or values. And if you are being bullied by more than one person (i.e. an organization or group), it is even more difficult to stand up for yourself.

More insidious and pernicious is the type of bullying that has less to do about forcing you to do something and more to do with “putting you in your place”–minimizing or even destroying you in order to make someone else feel better about themselves. People do this consciously or unconsciously because of a hole inside of themselves that they try and fill by being better than someone else. It gives them a sense of power and authority in the world that they may not otherwise experience. It is a way to externalize their own feelings of insecurity, inferiority, and/or rage by putting those feelings on someone else and then attacking them.

Some bullying is so subtle that you really believe the bully. They make you feel unsure of yourself; bad about yourself. They can even do it in the guise of friendship or love. It becomes more of a mind game than an outright violation. But it is bullying just the same. We will not be able to rid the world of bullies, but we can learn how to stand up to them.

How Do You Stand Up for Yourself to Stop Bullying?

First and foremost, recognize what is happening and remember that it is the bully who has the problem, not you. Unless they are physically threatening you, bullies are “paper tigers.” If you stand up to them calmly and confront their behavior rationally while asserting your rights, they will back down. If you call them out on their actions, they usually have no place to go–especially if others are witness to these actions. You don’t have to attack a bully; you simply have to calmly and self-assuredly stand up for yourself. You don’t want to give them reason to escalate by engaging in a heated or emotional manner. You may be thinking that this sounds easier than it would actually be. So start slowly. If you can’t immediately stand up to a bully, at least don’t play into their behavior by trying to appease them.

Let the bully know by your reaction that you are not cowed and quietly walk away. Think about what you want to say and either talk to them later or wait until the next time they behave that way and then call them out on it. Bullies don’t have any real power once they realize that you won’t engage in their game. Once you have exposed them; they will fade away.