The Abused Husband: Dealing with Aggression in Relationships 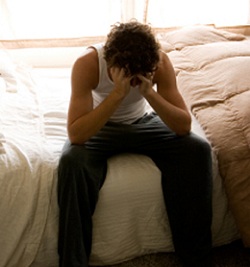 A psychology professor at California State Long Beach has compiled an impressive pile of data—more than 500 studies—suggesting that women are at least as physically aggressive if not more so than men in their intimate relationships.

In a 2008 ABC News “What Would You Do?” segment, actors played out two scenarios in public: a man verbally abusing his female partner, then shaking her and pulling her hair, followed by a woman doing the same to him. In the first instance, several people intervened and stopped the violence, sometimes angrily; in the second, no one did a thing. One female onlooker even pumped her fist happily as she watched the woman slapping her partner. “Good for her,” she later told the interviewer, “I’m sure he deserved it.”

I am not here to minimize male-on-female violence in any way. I know that women are usually more vulnerable than men to inexcusable panoply of verbal, physical, and sexual abuse. But I am here to report a flip side to this horrendous phenomenon—often more subtle and harder to detect—due in part to cultural stereotypes of masculinity and “toughness.” There is often shame and self-loathing felt by men who perceive themselves as “wimpy” (or worse) for not standing up to their partner.

I speak here of some of the men I have treated in my practice, both individually and in groups. Men who are verbally or emotionally abused by their wives or girlfriends are often loathe to see it as abuse and tend to blame themselves for causing it in the first place. Often these guys can’t imagine why their loved one would be so angry with them—unless they had done something to deserve it.

This holds true even when the anger is expressed in extreme ways. (I’m happy to report that I have not yet treated a man who was physically abused by his partner.) One of the people in my sessions several years ago told me, “The fact that my wife is still angry with me means I’m still screwing up.” He felt this way despite the fact that he spent nearly every moment trying (in vain) to please her.  It was hard for him to see any projection on his wife’s part.

Many of these people deal with addictions and compulsive behaviors, often as a way of reducing or soothing unbearably painful feelings of failure, low self-esteem, unworthiness, and other related affects. These men often report that they have “caused” their partners to lash out at them, or that they deserve abuse due to their irresponsible behaviors (and inherent “badness”).

What they often miss is that the partner’s anger—usually due to earlier trauma, such as neglect or abandonment—was at least partly in place to begin with. Intimacy requires safety and trust; rage and fear can be fatal corrosives. It becomes a chicken-and-egg question of which causes which. Both partners’ issues need to be addressed to restore marital health.

Of course, none of the males in my sessions have acted like boy scouts. They too have berated or verbally attacked their partners, watched pornography compulsively, or committed adultery. But—both before and after such desperate measures—they feel as though nothing will abate their partner’s anger.

One such person said to me, “It doesn’t matter whether I’m good or bad to her. She always thinks I’m a piece of shit. So I might as well act like one.” He grew up with a viciously abusive mother and had come to feel as though he somehow deserved such poor treatment.

A survey of people with an addiction to sex by recovery pioneer Patrick Carnes found that 97% experienced emotional abuse in their childhood. The percentage of those physically or sexually abused by their parents was slightly lower, but not by much. These numbers are telling. While this does not excuse or give carte blanche to destructive behavior—addictive or otherwise—it does create a context within which these behaviors germinate.

Our need for meaningful human connection—for being seen, understood, and loved—does not just go away, even when it is inconvenient, unmet, or felt to be undeserving. It is a necessary nutrient of the soul, even when it gets in the way or makes us lose face. It is like a “fault” that deserves judgment and criticism—by our partner or ourselves. How sad when two well-intentioned people fall into a cycle that continues to foster this corrosive lack of “nutrition”—on both sides, no matter who is being blamed.

© Copyright 2011 by By Darren Haber, PsyD, MFT. All Rights Reserved. Permission to publish granted to GoodTherapy.org.