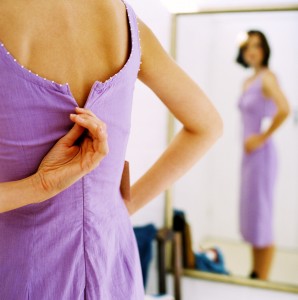 Body image issues are common among women and even young girls: among adult women, 91% experience dissatisfaction with their bodies, and 80% of 10-year-old girls expressing fears of becoming “fat.” These body image concerns can give rise to serious and even life-threatening issues. Teenage girls with low self-esteem are more likely to drink, and 13% of women report that they smoke to lose weight. Twenty-four million Americans struggle with anorexia, bulimia, or binge eating. According to a new study, though, women’s body image issues improve when they believe that men prefer fuller-figured women.

Both men and women are bombarded with advertisements, with most people seeing about 5,000 ads a day, compared to 2,000 just 30 years ago. Many of these advertisements prominently feature very thin and highly sexualized women, potentially convincing female viewers that these models represent the female ideal. Andrea Meltzer, the study’s lead author, argues that many women may believe men prefer ultra-thin women.

The study didn’t evaluate how long the positive body image effects lasted. Given the influence of advertisements and other negative body image messages, though, Meltzer believes it’s likely that positive messages would need to be steadily repeated to have a lasting effect.