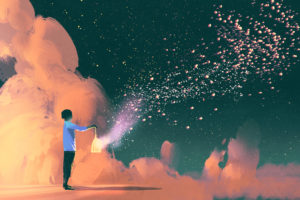 Sensitivity is often referred to in a negative context. Phrases such as “You’re too sensitive” can be commonplace when someone expresses strong emotions. Much of American society is not set up to honor the needs of highly sensitive people.

By definition, a highly sensitive person (HSP) is someone who has an innate high degree of sensory processing sensitivity and emotional intelligence. Studies show these people are naturally more sensitive to stimuli, whether it be loud noises, strong smells, or bright lights. They may startle easily, feel emotions strongly, and may be more affected by substances such as caffeine and alcohol.

Psychologist Elaine Aron, author of The Highly Sensitive Person, estimates that 15-20% of people are highly sensitive. Natural selection has continued this trait, as there can be many advantages to heightened sensitivity. Highly sensitive people might be different from the general population, but they are different in a way that could be useful—and perhaps crucial—to the function of society.

Here are eight traits HSPs typically have that could make the world a better place:

Highly sensitive people have a high degree of sensory awareness. They are often first to spot an animal in the wild. Strong awareness and attunement to the natural environment can be beneficial when it comes to recognizing threats and avoiding dangerous situations.

They are also keenly aware of how environment impacts mood and are skilled at knowing what it takes to create a pleasant environment. An office worker may feel agitated upon arriving to work every day but fail to recognize how a messy cubicle may be contributing to his or her emotional well-being. An HSP could walk into the room and immediately recognize the ill effect of the disordered stack of papers piled on the desk.

“Highly sensitive people are very aware of stimulants in their environment,” said Vicki Botnick, MA, MS, LMFT, marriage and family therapist. “It’s as if they have finely tuned antennae that can pick up minute changes in sound, color, light, and other peoples’ moods. In addition, they can become even more vigilant to ward against the discomfort this sensitivity causes. If a simple doorbell sounds to you like a painfully loud gong, you’re going to be on the alert so you can avoid feeling overstimulated. A benefit of all this attunement is a greater understanding not only of the sensory world, but how other people might react to their surroundings.”

Highly sensitive people may be more stimulated by external stimuli, so when they turn their focus inward, their energy can be channeled creatively.

Many HSPs are visionaries and inventors. They have vivid imaginations with colorful imagery and rich sensory details.  Highly sensitive people are more likely to be right-brained dominant, meaning their thinking is less linear, which can make them more creative, intuitive, and curious. They may process information, experiences, and situations in a deeper, fuller way, making them more open to possibility and better able to connect the dots and find the missing pieces.

“Highly sensitive people, who are taking in so much information and trying to make sense of it, often find they can capitalize on this perceptiveness by applying it artistically,” Botnick said. “By painting or writing, they can make use of their intellectual insights (the idea behind the work) while also combining them with their sensory insights (the look and feel of the work itself).”

3. Sense of Empathy and Compassion

Because HSPs are more keenly aware of emotions, they may be better able to sense what others are feeling and typically have more empathy, compassion, and genuine concern for others as a result.

They are typically more aware of nonverbal cues and can easily read others, picking up on subtle emotions that most people might miss. Many HSPs report experiencing another person’s emotions as if they were their own.

A 2014 study scanned the brains of self-reported HSPs to determine how they responded to the emotions of others. When researchers presented study participants with photos of people experiencing happy or sad emotions, they found that areas of the brain involved with awareness and empathetic feelings had greater blood flow in HSPs than in those without high sensitivity.

Highly sensitive people can be incredibly intuitive. They tend to be more connected with both the personal and collective unconsciousness, giving them access to information that doesn’t come through logic and reason. They are more in tune with their own nature as well as the subtle cues from their surroundings. They can easily sense what is going on beneath the surface and may have a strong knowledge about something without realizing how they received the insight.

Nancy Simon, LCSW, believes HSPs have a strong intuition because they can transcend left brain logic and reasoning easier than the average person.

“They are generally deeper thinkers and not afraid of exploring the unknown—probably due to trusting their intuition,” she said. “Their greater access to the right brain can block out unnecessary logic so they have more immediate access to their intuitive and gut instinct.”

5. Ability to Make Deeper Connections with Others and Themselves

Because they feel things on a deep level, HSPs usually crave meaningful connections. Their high levels of depth, empathy, and emotional intelligence make them excellent partners for those who can relate to and understand their emotional nature. Their profound self-awareness combined with the understanding of what drives others emotionally helps to create powerful, lasting relationships.

Their high level of self-awareness can also contribute to a stronger ability to recognize negative patterns deep within themselves. A 2015 study published in Personality and Individual Differences looked at 166 girls ages 11 and 12 experiencing depression. After presented with a 12-week class on reframing depressive thoughts, researchers found the girls with higher than average sensitivity were better able to internalize and apply the lessons, leading to a significant decrease in depression symptoms.

6. Ability to Notice Details and Subtleties

Highly sensitive people might be different from the general population, but they are different in a way that could be useful—and perhaps crucial—to the function of society.Highly sensitive people typically have keen senses and rarely miss even the smallest of details. Heightened senses might amount to more vivid hues, stronger smells, louder sounds, subtler tastes, and more sensitive touch. Because everything is amplified, everything is noticed.

If someone makes even a small change to the environment, such as moving a vase from a table to a window, an HSP is usually the first to notice. They tend to process information more carefully and can easily spot changes as well as errors or mistakes. These skills can be beneficial in most aspects of life and are particularly useful in careers in which being detail oriented is a desired trait.

“People with high sensitivity are firing on all cylinders,” Botnick said. “They are often receptive not just in terms of the physical world, with its strong sounds, smells, and tastes, but in the world of the mind as well. A sensitive person is a hyper-aware person, who might notice subtleties that other people would miss, such as a small movement of someone’s mouth that might indicate anger or a below-the-radar shift in how a group of people are interacting.”

Highly sensitive people are more likely to be self-reflective and think about the consequences of their actions. Due to their empathy and concern for others, they may also have a strong sense of justice and fairness. This can make them more conscientious than the average person, said Grace Malonai, PhD, LPCC, DCC. They tend to be more considerate of others and typically strive to do what they think is right in every situation.

“For some HSPs, personal and cultural values are exceptionally important, and their feelings associated with their values are heightened,” Malonai said. “This makes for a conscientious person. Justice and fairness are often strongly valued by HSPs because they notice, and are keenly aware of, so much unfairness in the world.”

Because HSPs tend to have a strong sense of empathy, they often have a low tolerance for the pain of others, which can lead to a strong desire for justice in society, Botnick said.

“Seeing the world not in black-and-white certainties but in nuanced shades of gray, they may pull for the underdog, grasp the details of complicated cases, or feel their own moral scruples more deeply than others,” Botnick said.

8. Ability to Be Peacemakers

Because of their heightened sensitivity, HSPs tend to become anxious around conflict and prefer to avoid it if possible.

“I believe that conflict is challenging for them because anger, shaming, and blaming are harsh emotions that can easily overwhelm someone who already has such a tender system,” Simon said.

However, their strong empathy can also ensure they are better equipped at seeing the other person’s point of view. They are naturally more relationship oriented than agenda oriented, making them great mediators if they choose to be active peacemakers. If there is ever a conflict that can’t be settled, an HSP may be able to help establish peace.

“HSPs become highly trained in reading other people and are often eager to dispel any tensions that could cause themselves more stress,” Botnick said. “Because of this, they can also excel at soothing others—sometimes before the other person even knows they’re upset.”

Sensitivity can be an asset rather than a problem. Next time you find someone who you see as being “too sensitive,” remind yourself of the many gifts they can bring to the world.